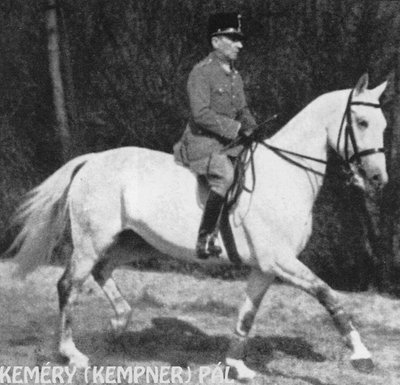 The 1928 Amsterdam Olympics ended with a rather odd fiasco for the Hungarian dressage riders. After arriving at the location and seeing the work of the other nation's riders they decided to return home before the competition began, despite the professionals present all agreed that Paul Keméry's trot work was better than the later winner Baron von Langen's, and the other member of the team, Desiderius Német's riding was at least as good

The difference and the reason for leaving was the canter work, more precisely performing a lead change for every stride. The Hungarian riders were puzzled to see their competitors were giving up on classical traditions and performed the piece of movement as if it was a circus display. The act of General Josipovich's disciples was to be explained for years, but today, in view of the contradictions of modern dressage it is clear that their standpoint and decision was right.

Travelling home was the last chapter of a long ongoing professional debate, of which on one side there were the most illustrious, orthodox representatives of the Austrian-Hungarian Equine Culture, General Sigismund Josipovich, Mauritius Herold, the head equerry of the Spanish Riding School of Vienna, Cavalry Colonel Michael Burján, etc., whilst the other side was represented by the victorious powers of the first world war, primarily by the bautcherists of the French riding school. Josipovich has made his objections against the program of the Amsterdam, and later Paris Olympics clear from the middle '20s, but the Amsterdam Olympics was the first time he met his fellow sportsmen under circumstances of a competition of this rate, since this was the first time the nations of the losing party made an appearance in the Olympic Games.(1)

How different modern dressage would be if Josipovich's standpoint prevailed!

(1)The Austrians participated in the Paris Olympics.