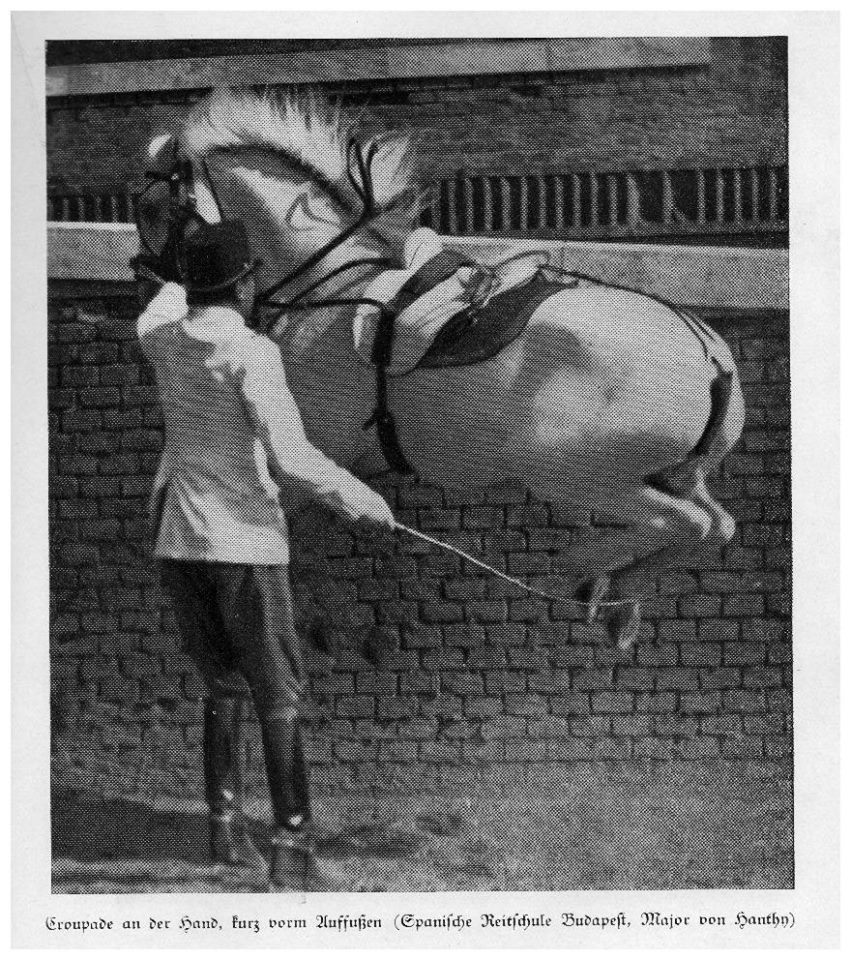 How could a high-level Equestrian Culture be maintained in a country as big as the Austro-Hungarian Monarchy? How could the furthest corps uniformly have excellent equine knowledge? The answer of the Monarchy was the two-tier training.

A campagne riding school was established in Wiener Neustadt. The aim of the campagne school was to train cavalry officers for the military units across the country, who, with certain simplifications, could train horses and riders for the army in a quicker pace than the relatively slow course of classical training.

Such martial simplification is the use of side-reins in lunging. Nowadays, for safety reasons, riders with modest skills are recommended to use side-reins too. However, using side-reins in qualitative lunging is inadmissible, since they prevent the muscles from stretching, which without serious work cannot be done.

'Squeeze your legs' is a military simplification. On that command, leg pressure comes from both sides simultaneously. In the case of a beginner rider, this command could and should be used, but with qualitative riding leg aids should be asked for only on the side where the horse's hind leg is in the air.

Although the officers trained in campagne schools worked with simplified means, they had academic qualification. They needed it to understand when and how simplifications could be used.

It's similar to the education of engineers. The use of high-level Mathematics is not present in the day's work, but the engineer has to know it, so if an unusual situation occurs, he has a conception of the solution. The engineer differs from the foreman by the high-level of theoretical knowledge. The same is true for medicine. The leech knows what they usually do in the given situation and can cure the patient ten out of ten cases. However, in the eleventh case, he'll mistreat him because he doesn't have the high-level qualification required to solve a problem that differs from normal.

The situation is similar to the case of folk music. If a folk song starts more or less anyone from the same community can finish it, even if one didn't know the song previously, but we can't explain or teach the rules of folk music to a stranger. This is why junior officers were not able to teach riding. How many times 'I can't explain, but give me your horse, I'll show you' could be heard!

One of the strangest problems of today is that in our fragmented equestrian culture these military simplifications remained, and sometimes they can contradict the high-end approach. So, at the campagne school in Wiener Neustadt, they trained officers of academic knowledge, while the maintenance of academic culture happened in the Haute École of Vienne. This school was the place of cultivating high culture. Knowledge crystallized throughout centuries was passed on from master to master here, so the next generation could fully understand it.

After the disintegration of the monarchy, in the 1920s this lost, two-tier training was brought back in Hungary. The campagne school of Wiener Neustadt was established in Örkénytábor, the Haute École in Budapest. Later became the Spanish Riding School of Budapest. Spanish, because they wanted to maintain the culture without the slightest change.